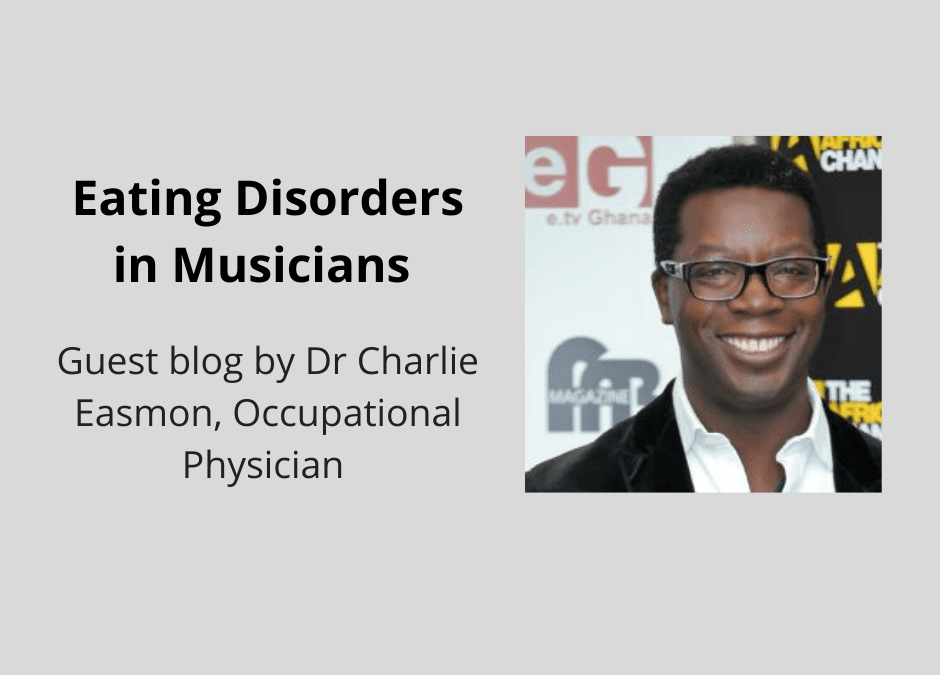 Performers may be perfectionists and perfectionists are more prone to mental health problems and included in this are eating disorders. In at least 50% of people with eating disorders there is an existing mental health disorder of depression or anxiety. In many cases the individual has been dealing with issues of low self-esteem and/or past traumas.

I rephrase ‘eating disorders’ as ‘disorders of thinking about eating’ and in this way the mental disruption is always kept to the forefront.

Eating disorders are never easy to treat or manage and are deep psychological problems.

Examples of problems caused may be the performer with ‘chalk like’ bones’ who breaks them after a simple fall. The singer who has to use mints to hide the vomit smell on their breath. The locked hotel room as the performer binge eats having ‘maxxed out’ room service food and/or drink.

Dr Marianna Kapsetaki (a student on the UCL course initiated by BAPAM in Performing Arts Medicine) and I in 2017 wrote a paper on Eating disorders in Musicians. This showed that 18% (almost 1 in 5) of those who replied had a current eating disorder and 1 in 3 had a history of eating disorder.

Florence Welch acknowledged her eating disorders in the song “Hunger’. Taylor Swift and Janet Jackson have talked openly about the pressures of unreasonable ‘figure expectation’ in female artists.

A performer wanting to look good in costume and dieting to achieve that is not an eating disorder.

Touring (once it restarts) makes healthy eating and nutrition difficult for everyone.

I think of the 3 main types of eating disorders as a horror movie playground. The scary slide is the anorexic descent to a declining weight by variations of cutting calories and exercising. The bulimic see-saw is the binge/purge cycle of eating vast amounts of food followed by various combinations of vomiting and laxatives. The binge eaters are on a ‘not so merry go round’ as their weight balloons.

If you think that someone has an eating disorder try to understand that they need careful management. Some people will need hospital or residential care, and some people will need to stop touring, as Ed Sheeran famously took a year off. Now is a good time to have systems in advance of touring or at least have a ‘resource’ handbook available to the key managers concerned with the performer’s welfare.

The UK Eating disorder charity BEAT is an excellent resource. Performing arts specialist counsellors and therapists can be found using the BAPAM Directory. Online counselling is available and both the BACP and UKCP also list registered professionals.

Self-Harm and Eating Disorders in Schools by Pooky Knightsmith

Florence and the Machine Taylor Swift

In our next workshop Career, Relocation & Business Coach Nicky Torode @diamondminds2 will share tips with @PRSforMusic members on how to keep up a regular journaling practice and everyday sources ... of inspiration to flex your journaling and creative muscle.

Trying to make it in the music business as an emerging artist is not easy.

To support the next generation of music talent, we are proud to to share the #MOBOHelpMusiciansFund 🙌🏾 which sets out ... to provide financial & business support @HelpMusicians! Apply: https://bit.ly/3wtT01G

The deadline for applications for Directory Support Officer at BAPAM is Nov 30. Part-time, based in London with some remote working. Supporting our growing Directory of performing arts specialist ... healthcare practitioners - https://www.bapam.org.uk/recruiting-directory-support-officer/